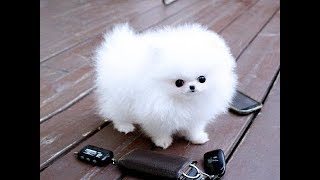 The Pomeranian (aka Pom or Pom Pom or Dwarf Spitz), a spritz dog breed, so called after a region in Central Europe formally known as the Pomerania, however now located between east Germany and north Poland.

Due to their tiny small size, Pomeranians are described as a breed of toy dog. Pomeranian breeds are ancestors of the far larger German Spitz and in many European countries they are known as the Zwergspitz (Dwarf Spitz).