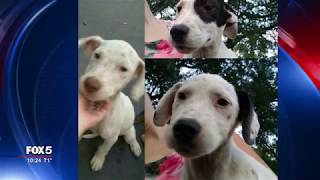 Police made a gruesome discovery inside the vehicle of a 22-year-old man: a badly decaying puppy inside a car, with a smell so awful, authorities were called to investigate the vehicle.

Marietta Police investigators believe Harrison Kristofak may have left a puppy in a vehicle without food and water for more than a day, and allowed the decomposing body to rot in the car.

The discovery happened at Life University, where police said Kristofak stopped by to visit a friend.

“There was a jug of water in the vehicle, but it was closed. There was no food or water available for the animal,” said Officer Chuck McPhilamy. “For it to have happened… and still never addressed, no one called, the dog not taken anywhere for help… it’s always troubling when officers come across something like that,” he said.

“He didn’t seem to show any empathy,” McPhilamy said, as officers raised concerns over the suspect’s story changing at the scene.

Kristofak said in the police report, he purchased the puppy from someone on Craigslist in Columbus and named it “Georgia.” The original owner, who wished to remain anonymous, said she sold and gave away numerous puppies from her litter, and provided FOX 5 photos of some littermates.

Kristofak claimed in the report, the puppy became ill and had died while he was on the road; he also claimed he kept the deceased dog in the vehicle to bring it back to Carrollton, where he wished to bury it.

Police charged with aggravated cruelty to animals. He was taken to the Cobb County Jail.

A necropsy will be performed to determine the exact cause of death.