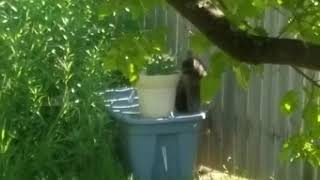 Here are two of Mistyfoots kittens. Of the original 5 of Mistyfoots kittens I have seen three. Mama Mistyfoot abandoned the weakest of the original five. I named the left behind kitten Sweet Pea. Sweet Pea only lived one more day. Mama Mistyfoot took four of them out of the Cat Habitat and moved them to a safer spot. At about two to three weeks of age the kittens were just becoming able to get out of the Cat Habitat on their own. So we figured when the kittens about eight weeks of age we would probably see them come back to feed. So far I’ve seen three but only two of them regularly. The one is light gray and white with black tiger stripes. The other kitten is black with the white feet and chest. I have some kitten food that the nice people at H.O.P.E. for Animals I gave me to feed the kittens, so that’s what they’re eating here. As they were eating the kittens stepped on the plate with their feet and it tipped up the plate a little bit so the one kitten is partially hidden because of that. They are as cute as can be and now we need to come up with two more names. I’ll ask my grandchild Tierney she is good at coming up with names. We named eight of the first eleven cats and kittens. If you are caring for any outdoor kittens or cats please consider using H.O.P.E. for Animals As a resource. Provide excellent help and advice and they’re also loan out live traps she want to capture cats and have them spayed or neutered afro very low charge. H.O.P.E. for Animals also sells pet food discount too. Recorded June 14, 2019